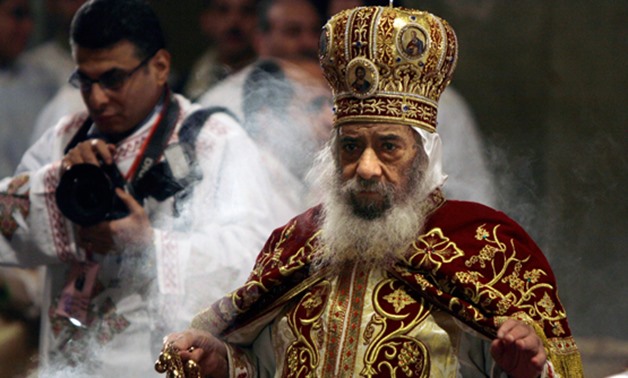 CAIRO - 7 August 2018: A series of fast-paced dramatic incidents at St. Macarius Monastery stirred up a dispute on social media between supporters of late Pope Shenouda III of Alexandria and those of the monastery’s founder father Matthew the Poor.

Arguments broke out Monday as monk Faltaous al-Makary attempted to commit suicide by cutting his wrists and jumping off a high building at the monastery. On the same day, monk Ash’eyaa al-Makary took poison after he had been stripped from his sacerdotal rank for committing “inappropriate” actions which contradicted with the monastic behavior and life.

A statement signed by Pope Tawadros II revealed that a special committee, formed by the Monastic Committee and the Monasteries Affairs of the Holy Synod, conducted a monastic investigation with Makary.

The church’s statement did not reveal the "inappropriate actions" committed by Makary; instead, Makary was expelled from the St. Macarius Monastery in Wadi El-Natrun to return to his birth name, Wael Saad.

Supporters of late Pope Shenouda III posted a video where he was answering a question by someone who wanted to join St. Macarius Monastery saying, “If you go there, you will not be able to continue and will eventually leave the monastery. Since you will come back in the end, do not go there from the beginning.”

“The number of those who left that monastery and got back to me is 52. I have a list of their names; some got back sane and some receive psychological treatment. Some abandoned monasticism and some I don’t know where they are. When you choose, do not just consider the place, consider life in that place,” Pope Shenouda III added.

Kamal Zakher, a writer specialized in Coptic affairs, debated that monks at St. Macarius suffer from mental issues because they conduct a huge amount of research and intellectual work; three of the top intellects in Egypt - Gaber Asfour, Nasr Hamed Abou Zeid, and Hoda Wasfy - published interviews with father Matthew the Poor.

St. Macarius Monastery has enjoyed a special status for decades. Late father Matthew the Poor (1919-2006) spent much of his later years there, granting it semi-independence from late Pope Shenouda (1923-2012). The two great Coptic icons were at odds ideologically, where the Poor was considered more on the progressive side.

The monastery’s monks are generally known for their deep knowledge and spirituality.
After Father Matthew the Poor's death, monks affiliated with Pope Shenouda’s school joined the monastery. Faltaous al-Makary and Wael Saad Tawadros belong to the wave of monks that joined the monastery following the founder’s death.

In 2013, late Bishop Epiphanius was elected head of the monastery after monks belonging to the Poor voted for him, while the rest abstained. Pope Tawadros tasked him with “uniting” the monastery.

The late bishop was found dead and covered in blood on August 29. The preliminary security investigation suggested that Bishop Epiphanius was hit by a sharp object. The body of the bishop was transferred to the morgue of the Wadi El-Natrun Central Hospital.

Monk Basil said that the crime took place at 3 a.m., adding that the monastery contacted Pope Tawadros II of Alexandria following the discovery of the crime. Basil excluded the possibility that Epiphanius was murdered by a thief, as Epiphanius did not own anything and none of his belongings were reported missing.

Monk Ash’eyaa al-Makary was detained at the monastery's clinic in Beheira governorate’s Natrun valley, but was released following a prosecution order at 5:20 a.m.

Egyptian bishops deactivated their social media accounts after Pope Tawadros II had issued a set of rules regulating monasticism on Thursday. Although the decision only addresses monks, the bishops’ initiative aims at setting an example of obedience to younger generations at convents.

The pope himself deactivated his accounts.

1) Halting all applications for monasticism in Orthodox convents in Egypt for a year starting August 2018.
2) Monasticism and priesthood will be withdrawn from individuals who had established convents without acquiring consent from the patriarchy. Founding new convents will not be authorized but reviving old ones under the supervision of operating convents is allowed.
3) The number of monks in each convent will be determined according to its capabilities and circumstances in order to improve the quality of monastic work.
4) Halting monastic ordination of priests for three years.
5) Regular Christians are not allowed in any monastic ordinances in preservation of monastic traditions and solemnity.
6) Convents will receive visits and trips throughout the year. However, visit days will be restricted to Fridays, Saturdays, and Sundays during fasting. All churches must be cautious of visiting unauthorized places.
7) Observing monks’ commitment to eternal life and avoidance of any deviations.
8) Monks are deprived from monasticism in case of:
a) Media appearances by any means and for any reason.
b) Getting involved in any financial deals or projects not assigned by the covenant.
c) Leaving the covenant for no reason and going on visits without prior permission from the covenant’s head.
9) Monks are not allowed to attend wreaths or funerals unless permitted by the covenant’s head and only two monks maximum are allowed to attend a certain funeral or wreath.
10) Monks must deactivate their social media accounts within a month and abstain from inappropriate acts or risk facing measures taken by the church.
11) All Christians should abstain from getting involved in any financial deals or projects with monks. They must only provide donations - regardless of their type - to the head and associates of the covenant.
12) Putting into effect the monasticism and covenant life management issued by the Holy Synod in 2013.

The rules were issued four days after the murder of Head of St. Macarius Monastery in Wadi El-Natrun, Bishop Epiphanius. However, the spokesperson of the Orthodox Church, Priest Boules Halim, denied in statements to Associated Press on Friday any relation between the decisions and the bishop’s death, saying that the goal is embedding discipline in monastic life.

Additional reporting by Sara Allam and