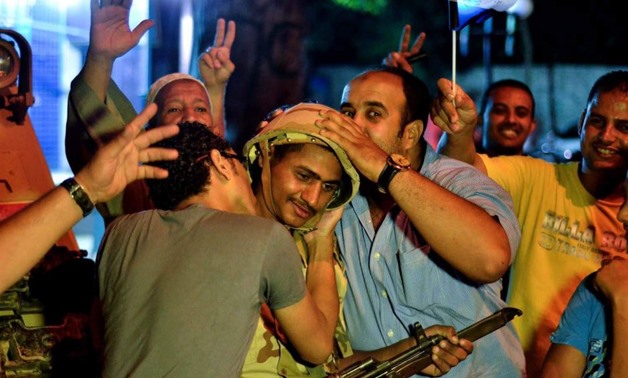 Egyptians in Cairo hug and kiss a soldier, on July 3, 2013-AFP/Mohamed El-Shahed

CAIRO – 30 June 2018: Five years after the ouster of Brotherhood-affiliated President Mohamed Morsi, Egyptians have taken to the streets again, but this time to commemorate the fifth anniversary of the June 30 Revolution.
The Egyptian Cabinet, headed by newly-appointed Premier Mostafa Madbouli, announced July 1 a national holiday to both the public and private sectors across the country for the occasion of the June 30 celebrations.

Some still doubt the motives behind the second popular uprising that took place less than three years since January 2011. Some others have frequently accused Egypt of imposing restrictions on the freedom of expression and human rights violations.

One of the Brotherhood’s allegations is that the people’s will that was witnessed in the streets calling for the overthrow of Morsi in June 2013 was actually a military coup.

Coup vs. Revolution linguistically
Coup d'état refers to a “sudden defeat of a government through illegal force by a small group, often a military one” according to the Cambridge dictionary. Another definition is found in the Oxford dictionary as follows: “a sudden, violent, and illegal seizure of power from a government.” The two definitions of “coup” thusly cannot be said to represent this case.

On the contrary, the Cambridge dictionary defines ‘revolution’ as “a change in the way a country is governed, usually to a different political system and often using violence or war,” and this reflects the June 30 case.

When Egyptians chanted “bread, freedom, and social justice,” the main demands of the January 25 revolution, they thought their demands would be easily met by the Muslim Brotherhood group which “stole the revolution from the youth” as observers described then. However, the three demands were not met by the first elected administration of the MB, which is currently outlawed in Egypt and other Arab countries.

Why did army interfere to June 30 revolution?

The one-year rule of the Muslim Brotherhood in Egypt and the misbehavior of Morsi and his group showed how he lacked a basic understanding of Egyptian political dynamics, and that is why he was unable to complete his term in office.

Morsi could not accomplish any progress at all in dealing with Egypt’s internal and external challenges, from minor domestic challenges to the external threats facing the government.
In 2012, Egyptians had high expectations after the revolution in 2011. In addition, Morsi was manipulating the political scene by appointing his affiliates in all government organizations and institutions, giving them privileges, enabling terrorist groups to expand in Sinai, threatening Egyptian national security and working hard to Brotherhoodizing the Egyptian civil state.

On July 1, Egypt’s Supreme Council of the Armed Forces (SCAF) issued a statement titled "The Final Hours" that read: "We swear by God that we are ready to sacrifice our blood for Egypt and its people against any terrorist, extremist or fool."

Former first lady Gehan Sadat was shocked when she saw her husband’s murderers honored and respected by Egypt’s then-President Morsi who brought the killers of late President Anwar Sadat to Cairo Stadium declaring ‘Jihad’ in Syria against Bashar al-Assad’s regime in October 2012.

After the success of the security forces to disperse the Brotherhood sit-ins in Nahda and Rabaa al-Adawiya in August 2013, Brotherhood leader Mohamed Beltagi threatened Egyptians to continue supporting terrorist groups in Sinai if Morsi was not reinstalled as the ‘legitimate president’ of Egypt, according to a video circulated on the internet.

Brotherhood endeavors to ruin Egypt
The Brotherhood exerted its best efforts to impede the Egyptian administration’s corrective path which began with the June 30 revolution including organizing protests against Sisi in many foreign countries during his first visits abroad such as Germany, the U.S. and France in 2014 and 2015. By time, the Brotherhood and Sisi opponents got fed up with these destructive attempts. Such protests stopped and Sisi had begun his corrective revolution against corruption.

Regional Muslim Brotherhood branches cut ties with Egypt’s mother Brotherhood
Political analysts believe that the Brotherhood’s embracing of those principles revealed their “ugly face” in several political events since the foundation of the group, and was the cause of their plight over the years, and therefore, they were banned in many countries. That is why the Brotherhood in Egypt disbanded several times, either by the judiciary or ruling authority starting from 1948 through to the crisis of 1954, until the Egyptian government considered it a "terrorist group" in December 2013.

Some Gulf Arab states also sensed the danger of the Brotherhood and accused some of its leaders of trying to seize power, and issued against its members varying provisions, hence the group is no longer visible in a number of Gulf states currently.

Egypt was not the only county to ban the Muslim Brotherhood; the United Arab Emirates took strict procedures against them, and the Saudi authorities put the Brotherhood on the list of terrorist groups in March 2014. As for the Sultanate of Oman, their Brotherhood, which was founded at the end of the 1970s, faced in the 90s accusations of establishing a secret anti-state organ, that is why some of its members were sentenced to death and some others went to prison, before the group turned into an ideological current.

In Algeria, the movement of Peace Society, founded in 1990, the most affected by the Muslim Brotherhood, has seen several splits and ideological differences hit the group in Sudan, which was founded in the 50s and which has seen several leaders, last of them is Ali Gaweesh.