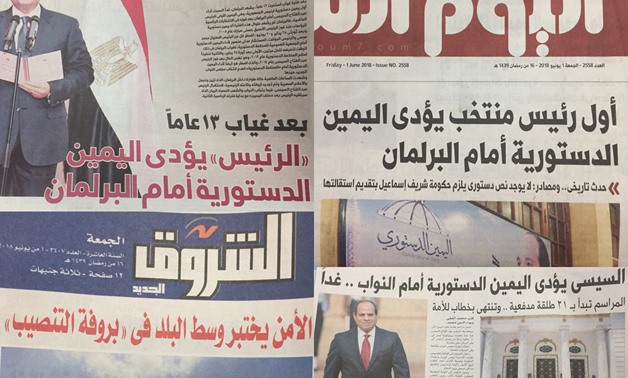 CAIRO – 1 June 2018: Egyptian House of Representatives is being prepared to receive President Abdel Fatah al-Sisi on Saturday to swear in the oath for his second term (2018-2022). Sisi will be the first elected president to swear in before the Parliament in an exceptional session.

Sisi swept the presidential election held in March. He won with more than 97 percent of the votes against his rival Moussa Moustafa Moussa. He swore in for his first presidential term in 2014 before the General Assembly of the Supreme Constitutional Court due to the absence of the parliament at that time.

Egyptian Constitution Article 144 stipulates that the president of the republic must take the following oath before assuming his presidential functions: “I swear by God Almighty to loyally uphold the republican system, to respect the Constitution and the law, to fully uphold the interests of the people and to safeguard the independence and territorial integrity of the nation.”

According to the Constitution, Sisi’s first presidential term ends on June 3, 2018. Swearing before the Parliament will be applied for the first time since 2005 when former President Hosni Mubarak took the oath for the last time.

Most Egyptian newspapers allocated their front-pages to cover the last-minute preparations of President Sisi’s swearing-in ceremony. Egypt Today has reviewed most of the published papers on Friday and sums up their coverage.

Sisi’s swearing-in ceremony on Saturday will begin at 10:30 a.m.; in accordance with the Parliament’s bylaw and constitutional regulations.

“First elected president to swear in before the parliament,” said the main headline of the front page of Youm7’s newspaper on Friday. Parliament Speaker Ali Abdel Aal is expected to give a speech to celebrate Sisi and review his first term’s achievements, Youm7 added.

Sources to Youm7 revealed that the incumbent Cabinet, headed by Prime Minister Sherif Ismail, will not necessarily change after the new term begins, but “this is at the president’s hands.”

National newspaper of Al-Akhbar allocates page five to cover the Parliament’s preparations for the oath-taking ceremony, in addition to designating the main headline of its front page as “Sisi takes oath before parliament tomorrow [Saturday].”

Al-Gomhoria newspaper reported that in a few hours the second term of Sisi will begin amid economic achievements such as decrease of inflation volume and increase of the GDP to reach 5.4 percent for first time in seven years.

“Sisi will give a historic speech to the nation after taking the oath,” Gomhoria newspaper revealed on Friday.

Privately-owned newspaper of Shorouk revealed that “There is no sign to close the metro station located in Tahrir square at the time of the swearing-in ceremony,” stressing that the metro is working normally on Saturday.

Al-Watan newspaper dedicated three pages to cover the ceremony’s preparations and tackle the following scenarios after the oath-taking for the Cabinet and new governors’ reshuffle.

In exclusive remarks to Al-Watan newspaper, a shoe-cleaner working near the parliament described Sisi as a gift from God. He said former President Hosni Mubarak, toppled in 2011, was polite, while Brotherhood-affiliated President Mohamed Morsi, ousted in 2013, was “immature and chaotic.”

State-owned Al-Ahram newspaper did not allocate a large space to the coverage, but it covered the news in brief on its front page.

Al-Masry Al-Youm newspaper did not publish the ceremony’s preparations on its Friday edition’s front page; however it covered the news in its third page.