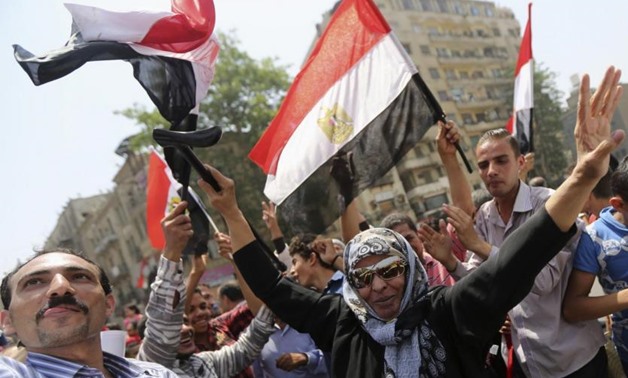 CAIRO – 28 March 2018: With Egypt’s 2018 presidential election ending Wednesday, March 28, there have been plenty of odd situations that emerged during the historical political event.

Here is a list of the election’s unforgettable quirky moments:

A picture of one of the thousands of banners across Egypt in support of President Abdel Fatah al-Sisi in the election has been shared thousands of times since Monday, March 26. It is a family banner that "outs" one of its members as a non-supporter. However, the original Facebook user who shared it revealed that it is photoshopped.

The photoshopped banner reads, “The family of al-Sherif, except for the disobedient Waleed al-Sherif, supports and pledges allegiance to President Abdel Fatah al-Sisi with love for another presidential term. The Egyptian army is the armor and sword of the homeland.”


The “Da Begad?” Facebook page, which has more than a million followers after building credibility by exposing photoshopped images and trumped up news that does not come from news websites, refuted the widely shared picture.

The page posted a picture of the same banner but from a different angle. This time it reads, “The family of Sennu, Haj Reda al-Haji Awad Sennu and Mr. Hamada al-Haj Awad Sennu and the family of Sennu supports and pledges allegiance to President Abdel Fatah al-Sisi for another presidential term. The Egyptian army is the armor and sword of the homeland.”

The post debunking the viral image has been shared far less, and people commented on it that it was a funny joke, regardless of whether or not the image is true. A couple of hours later, the original maker of the photoshopped picture, Mohamed al-Sherif, revealed the truth. He was just trolling a family member named Waleed.

The latest post of Mohamed al-Sherif about the picture has been shared thousands of times in only an hour. His original post with the photoshopped picture did not make the viral reach, but other Facebook users took the image and posted them on different pages claiming it is real.

Meanwhile, the man previously known as "disobedient Waleed" made a Facebook post with a picture of his inked finger, saying jokingly "They want to drive a wedge between us, Mr. President; I swear I voted for you."

Members of U.S. delegation dance with voters in Menoufia

The delegation, which includes Andy Braner, an international fellow at the office of U.S. Congressman Jeff Fortenberry, and Sasha Toperich of Johns Hopkins School of Advanced International Studies (SAIS), expressed their excitement at sharing joy with Egyptians casting their ballots.

In statements to Egypt Today, Toperich said that the voting process has been going smoothly since the early morning of the election’s first day on Monday, March 26. He added that neither he nor any of his colleagues noticed any voting breaches.


“All of the observers and judges supervising the election are acting professionally. I’m glad to see Egyptians keen on going and participating in the election. I love Egypt and will continue supporting and loving it,” Toperich said.

Newlyweds make it to polling stations on 1st day of voting

On their wedding day, several couples across Egypt made it to the polling stations to cast their ballots; another good reason to celebrate.

Before they went home after their wedding ceremony, a newlywed couple in the Upper Egypt governorate of Beni Suef made a stop at a polling station to cast their votes in the presidential election.

The polling station was about to close, but they insisted that they wanted to enter and cast their votes, as they wanted to do something special together for their big day, according to media reports.

Another married couple made it to the polling station only a few minutes before it closed its doors.

Amid the sweeping joy, the newly married couple, who are residing in Beheira governorate, took pictures with family and friends accompanying them.

In another extraordinary moment, a couple in Qena decided to hold off their wedding ceremony until the election date.

Mohamed Abdel Latif, 24, said in press remarks that he traveled abroad to work and get the money he needed to marry his sweetheart. The first thing he wanted to do with his bride after marriage was to practice their constitutional right and partake in the electoral vote.

Dancing to Nubian and traditional love songs, a couple was celebrating their wedding in front of a polling station in Aswan. In press remarks, the couple said that they wanted to make their big day “memorable” and that they decided to have their wedding day held on the first day of the presidential election.

An Egyptian woman wearing niqab said that she had casted her ballot in the presidential election on Tuesday, March 27, opposing her husband, who threatened to divorce her if she left the house to vote in the election.

The wife, who voted at the Ahmed Orabi School polling station in Duwaiqa district, added that she was determined to participate in the election despite her husband’s threats, saying, "The husband can be compensated, but Egypt cannot."