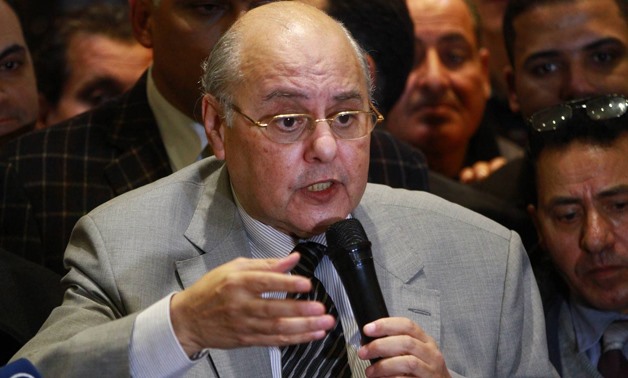 CAIRO – 21 March 2018: Presidential Candidate Moussa Moustafa Moussa is set to deliver a statement on Wednesday to voters in a campaign conference, to urge Egyptians to participate in the internal 2018 presidential election set to start on March 26.

In his interview with the Guardian, Moussa said that he is optimistic about his chances of beating his sole challenger, incumbent President Abdel Fatah al-Sisi. “We entered with the aim of winning. How we win it, I don’t know. With what kind of votes, I don’t know,” he said.

On the last day for candidates to register to vote on January 29, Moussa submitted his papers to the National Election Authority (NEA), to be the only contender to Sisi.

Moussa became the chairperson of the Liberal Al-Ghad party in 2005, a year after the party was founded by former presidential candidate Ayman Nour. However, when Moussa announced he would run for presidency, many ordinary Egyptians could not easily recognize him.

It is not Moussa’s view that his popularity is low. Moussa said that the Egyptian Council for Arab Tribes, which includes more than 40 million citizens, as well as the General Union for Farmers, supported his candidacy. In addition, he said that he has received 47,000 endorsements, while a candidate needs only 25,000 in order to be eligible to run for president.

Following his decision to run, Moussa vowed that he will resume the projects and achievements that Sisi has begun and carried out throughout his first term in office. This reportedly made great sums of people swing towards supporting Sisi, as for them it implied Moussa would not embark on anything new.

But when interviewed with Egypt Today in January, Moussa said, “We see the citizens’ sufferings in these economic conditions. We have a vision that we can achieve while being part of the system.”

Following lawyer Khaled Ali’s withdrawal from the presidential race, many people thought the election would be replaced with a referendum. However, Moussa’s decision to run for the race has legitimized it.

Slamming people who thought Moussa was brought by the state in order to avoid anyone else running against Sisi, Moussa denied he is running as a "phony" competitor in the presidential election, affirming he is running independently of the government and was not instructed by any governmental institution to join the race.

When asked about Al-Ghad Party’s previous support of Sisi, Moussa answered, “Previously, we supported Sisi and were not rivals; playing a role in helping him develop the country. But the situation now is completely different, as we have decided to participate in the presidential election.”

During the voting process for Egyptians abroad, which took place from March 16 to 18, expatriates were seen waving Egyptian flags and carrying pro-Sisi posters. In Egypt, thousands of Sisi posters are seen on the streets, while Moussa’s posters are very scarce. Moussa said that some people are afraid to show support for him, because they think they will be perceived as being against the state.

In the 2014 election, Sisi’s former sole contender, Hamdeen Sabahi, founder and leader of the Egyptian Popular Current, only received roughly 3 percent of the vote despite having considerable popularity.

Sixty million eligible voters will cast their ballots in the election between March 26 and 28 in Egypt, while expatriates voted between March 16 and 18 at 139 polling stations located in the embassies and consulates of 124 countries.