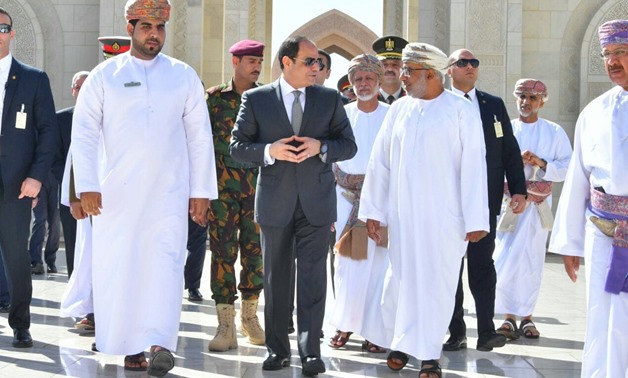 President Abdel Fatah al-Sisi during his visit to Oman on February 5, 2018- Press Photo

CAIRO – 5 February 2018: Omani and Gulf newspapers have continued their special coverage of the Egyptian President Abdel Fatah al-Sisi’s ‘historic visit’ to Muscat for the second day in a row. Both Arabic and English-speaking newspapers issued in Oman highlighted the Egyptian leadership’s visit to Oman for the first time since Sisi took up office as president in 2014.

State-owned Omani newspapers tackled the bilateral interests of both countries and the anticipated outcomes to follow this visit.

The hashtag of Oman greeting Egypt #عمان_ترحب_بمصر_الكنانه spread widely on social platforms in Oman, in accordance with the ‘historic visit’ of Egypt’s Sisi to Muscat. Omanis expressed their pleasure with the Egyptian president’s visit.

Kuwaiti newspapers on Monday highlighted the historic visit that President Abdel Fatah al-Sisi paid to Oman and important issues tackled by Egyptian and Omani leaders.
“Oman receives Sisi: Egypt is the Arab Nation’s Podium,” was the frontpage’s headline of Al-Nahar newspaper, which focused on the fruitful outcomes resulting from mutual cooperation between Cairo and Muscat.

Omani Minister of Foreign Affairs Youssef bin Owli stressed that the upcoming Arab summit due to be held in Saudi Arabia will strengthen the Arab solidarity, adding, “Egypt is the backbone of the Arab nation and the podium which embraces all Arabs.”
Kuwait-based Al-Nahar put spotlight on the Nour Party’s support to President Sisi in the next presidential election, due to be held next March. The Salafi-leaning Nour Party urged Egyptian citizens to take part in the elections and vote for Sisi.

Al-Anbaa newspaper described Sisi’s trip to Oman as a ‘historic’ visit, in which Sisi and Qaboos shall discuss ways to boost bilateral cooperation in several fields and exchange views over recent developments in the Arab region.

Assiyassah newspaper wrote about the political topics that Sisi and Qaboos have tackled most notably the Yemeni crisis. The newspaper manifested that Sisi has expressed his gratitude to the Oman’s positions that Sultan Qaboos has taken towards Egypt.

Qaboos asserted to Sisi the full support of the Egyptian leadership’s actions against terrorism. The newspaper added that the two leaders tackled international and regional issues, discussing ways to reach political settlements in light of the ongoing crises in Yemen, Syria, Lebanon and Iraq.

Sisi started his visit to Oman and Abu Dhabi on Sunday, which was Sisi’s first official visit to Oman since he took the power in 2014 and the first Egyptian presidential to visit to the country since January 25 revolution, confirming that Sisi seeks to promote the region’s security.

Talks between the two leaders addressed economic cooperation and trade deals through the mutual committee, which will hold a meeting in Muscat soon. It also tackled the recent issues in the region, where Sultan Qaboos reviewed his vision to solve the Yemeni crisis in a way that can ease the suffering of Yemeni people. The two leaders also discussed regional issues in Syria, Lebanon and Iraq.

The Egyptian president and his accompanying delegation will meet a number of Omani businessmen and investors to discuss increasing cooperation in different economic sectors, the official spokesperson of Egyptian Presidency Bassam Radi said.
The economic relationship and cooperation between the two countries come as part of the Great Arab Trade Agreement.

The Greater Arab Free Trade Area is an economic alliance between Arab States for economic integration and low tariffs trade. It began operation as of the beginning of 2005.

According to an official statement, presidential Spokesperson Bassam Rady said that the second day of Sisi’s remarkable visit to Oman included many activities, in a way that deepens relations between the two countries.

The sultan also valued Egypt’s role in enhancing Gulfi stability and security, confirming the long depth of Egyptian-Omani relations of cooperation and friendship, according to Radi. Sultan Qaboos expressed hope for Sisi’s visit to boost bilateral relations between the two countries.