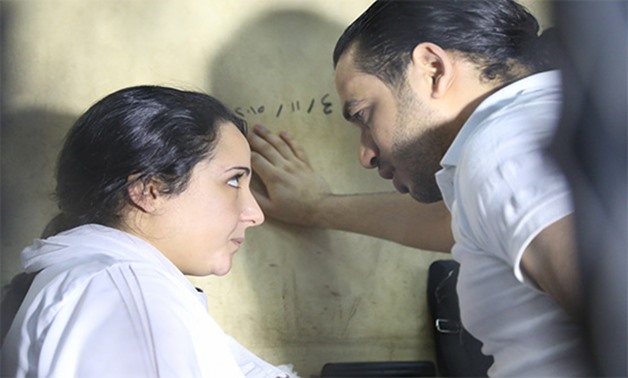 CAIRO - 16 April 2017: The Cairo Criminal Court acquitted activist Aya Hijazi, founder of Belady NGO Sunday, along with seven other defendants after acquitting them of charges of human trafficking, after three years of detention. The case was a point of disagreement between Cairo and Washington as the former President Barack Obama administration have called on the Egyptian government to end the case and release Hijazi.

However, the Egyptian government responded at the time that the judge of the case is the only one who can decide either Hijazi is guilty or not.


Who is Aya Hijazi?

Aya Hijazi is an Egyptian-American children's rights defender who decided to return to Egypt, from the United States, after the 25 January Revolution to engage in social development and children's rights. In September 2013, she launched the Belady Foundation for Street Children, along with her husband Mohammed Hassanein.

The foundation aimed to address the plight of street children in Egypt who did not have the opportunity to attend school and provide them with reading, writing and art classes, recycling workshops and other activities.

In May 2014, the police raided the Belady foundation headquarters and arrested everyone on the premises pursuant to a complaint filed by a man who alleged that his missing son had been held in the foundation's premises in Downtown Cairo. The police searched the office, arrested Hijazi, her husband and six others.

At the time, they faced charges of human trafficking and child abuse as well as running an unlicensed organization, inciting street children to join pro-Muslim brotherhood protests and sexually assaulting minors.

Other defendants during Sunday's trial- Photo by Karim Abdel Aziz

U.S. Representative Don Beyer and several congressmen called for the immediate release of Hijazi. His call was based on a lack of evidence presented the police authorities to support their charges.

Senior Egyptian involve in the communication between US administration and the Egyptian government official told Egypt Today that the government did not practice any pressures on the judge and the President Abdel-Fatah Al-Sisi said to the US officials during his last visit to Washington, that the Hijazi's case is between the hands of judicial authority and the executive authority has nothing to do.


Case closed
The charges for which the defendants were detained were proven false at the end.
The forensic report, presented to the prosecution, found no signs of torture or sexual abuse on any child. As a result, Hijazi, her husband, and the five other NGO members were acquitted of all the charges Sunday.

Hijazi’s U.S. citizenship may have played an important role in increasing attention to her case, causing an international and a local controversy. However, the judge in the end made his own decision and released all the activists detained in the case.