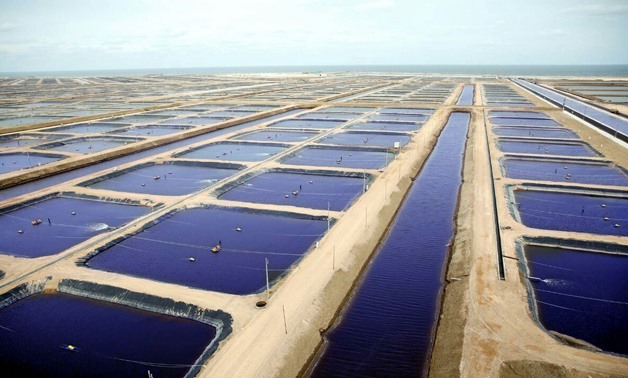 The fish farming mega project consists of two phases; the first phase was carried out on an area of 4,000 acres and will expectedly cover up to 70 percent of Egypt’s domestic need of fish.

The project consists of a hatchery for fish and shrimp on an area of 17 feddans with a capacity of 20 million fish and two billion shrimp.

The project also includes 1359 aquariums and 83 projects of popular Egyptian fish.
It is planned within the project’s framework that an ice factory will be built on an area of 450 meters, with a production capacity of 40 tons of crushed ice each day, and 20 tons of ice blocks for freezing fish and shrimp. Furthermore, a foam factory will be constructed on an area of 1,200 square meters to produce fish and shrimp containers.

The project's productivity contributes to the reduction of fish imports by about 27%. It provides at least five thousand job opportunities for residents of Kafr El-Sheikh and the surrounding governorates.

An industrial city will be built in the fish project, including four main factories, a development and training center, and a central laboratory to ensure high quality products.

The area on which the excavation and drilling works take place amounts to 16 million Square meters, which is six times the size of the Great Pyramid; the iron rods required for the construction works were estimated at 13 thousand tons.