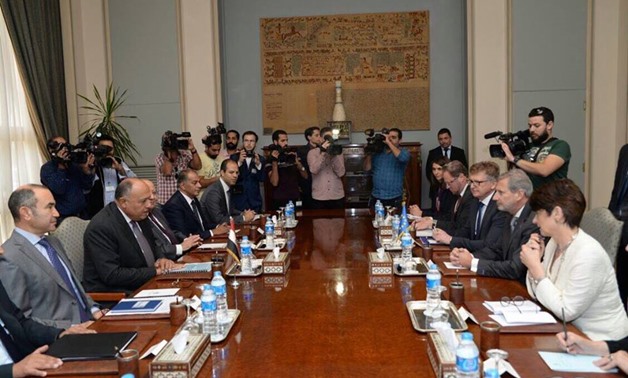 CAIRO – 30 October 2017: Egypt’s efforts supporting both the Libyan and Palestinian conflicts will continue during the upcoming period until political solutions are reached to enhance peace and security within the Middle East region, Foreign Minister Sameh Shoukry said on Monday.

During a press conference held with European commissioner for neighborhood policy and enlargement negotiations Johannes Hahn, earlier in Cairo, Shoukry affirmed that Egypt has been intensifying its efforts over the past period to unite the Libyan parties’ opinions regarding the Al Skhirat agreement.

“We support the UN special envoy to Libya, Ghassan Salame’s efforts to reach a political solution in Libya, as we believe that it’s the only way out of the current situation,” Shoukry said.

Furthermore, Shoukry explained that the Libyan military plays a major role to combat terrorism that comes as a result of the political vacuum in the country.

Regarding the Palestinian conflict, Shoukry affirmed that reconciliation between Fatah and Hamas enhanced the Palestinians’ political capability to negotiate internationally for their right to establish a state.

“Egypt will continue its efforts regarding the Palestinian case as per its significant importance to us,” Shoukry said.