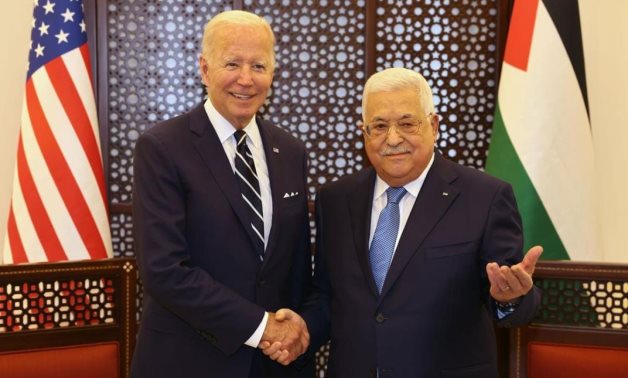 US President Joe Biden meets with Palestinian counterpart Mahmoud Abbas in Ramallah on July 15, 2022- photo from the Palestinian embassy in Cairo-

Speaking during a joint press conference with Biden, Abbas added that today's meeting represents a perfect opportunity to discuss ways of boosting bilateral ties between the two countries.

Todays' meeting is also considered an opportunity to discuss the role that could be played by the US in order to achieve just and comprehensive peace, added Abbas.

Abbas, meanwhile, underlined the importance of restoring the foundations of the peace process that involves the establishment of an independent Palestinian state along the 1967 borders.

Abbas said "After 74 years of the Nakba, displacement and occupation, is it not time for this occupation to end, for our steadfast people to gain their freedom and independence, and for the hopes of our young men and women, whom we cherish and trust and their creativity, to achieve in a promising future without occupation."

"In this regard, we say The key to peace and security in our region begins with recognizing the State of Palestine, enabling the Palestinian people to obtain their legitimate rights in accordance with international legitimacy resolutions, and ending all permanent status issues, including the Palestinian refugee issue, and the way to that begins with ending the Israeli occupation of the land of the State of Palestine with East Jerusalem as its capital on the 1967 borders” he added.

He highlighted to President Biden the importance of restoring the foundations of the peace process based on the United Nations resolutions and the two-state solution on the 1967 borders.

Abbas renewed the call for President Biden to fulfill his promises with regards to reopening the US consulate in East Jerusalem, remove the PLO from the US terrorist list, and reopening the PLO office in Washington.

“We, for our part, are ready to work within the framework of partnership and cooperation in order to remove any obstacles to achieving that,” he added.

Abbas urged the US to help "turn the page on the Israeli occupation of our land, end the acts of racial discrimination (Apartheid) against our people, and stop unilateral actions that undermine the two-state solution."

He made reference to the killing of iconic Al-Jazeera journalist Shireen Abu Akleh and called for the perpetrators to be held accountable.

Abbas said that only if Israel ends its occupation of the territories of the State of Palestine, including East Jerusalem, it "will be accepted to live in peace, security and good neighborhood with countries and peoples of the region," Palestinian news agency reported.

"The opportunity for a two-state solution on the 1967 borders may be available today, and it may not remain for a long time," Abbas said while pointing out that he extends his hand for peace based on the UN resolutions and the Arab Peace Initiative