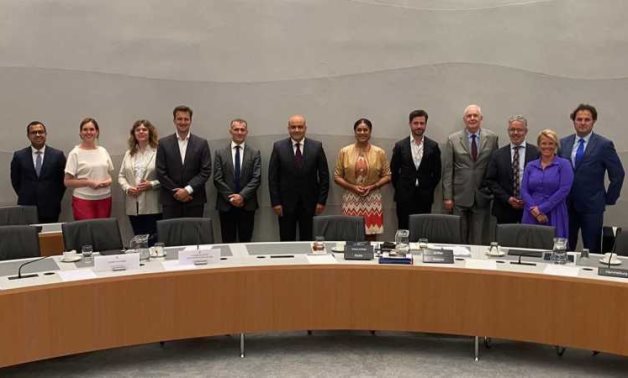 Meeting of Ambassador to the Hague Hatem Abdel Qader with members of the Dutch House of Representatives' External Trade and Development Cooperation Committee in July 2022. Press Photo

CAIRO – 10 July 2022: Ambassador to the Hague Hatem Abdel Qader exchanged views with Chairwoman of the External Trade and Development Cooperation Committee at the Dutch House of Representatives Jorien Wuite on the priorities of cooperation between both countries in the coming period, focusing on trade and boosting the flow of investments into Egypt.

The meeting was also attended by the committee members who belong to various Dutch political parties, as the ambassador gave an overview of the key mega projects Egypt is implementing as well as the socio-economic efforts deployed within Egypt's Vision 2030 on Sustainable Development.

Abdel Qader noted that the majority of ongoing projects are concentrated in the sectors of energy, urban development, transportation, roads, agriculture, water management, and seaports. He also highlighted the ratings and rankings by international establishments of the Egyptian economy.

The diplomat pointed out that Egypt is expected to achieve more growth in the near future, and that it aims for partnerships with the Netherlands on the bilateral and European Union levels in the realms of energy, food security, experience and technology transfer.

Egyptian Minister of Environment Yasmine Fouad met in June, on the sidelines of the Stockholm +50 Conference, with her Dutch counterpart Vivianne Heijnen to discuss mechanisms of joint cooperation on climate and biodiversity.

At Stockholm +50 Conference, which is organized by the United Nations General Assembly in Sweden, the two sides conferred over integration of environmental work with the energy and water sectors.


“Egypt is shifting towards a green economy through adopting many measures; including the amendment of policies, regulations and laws, as well as the inclusion of the environmental sustainability standards in the State budget,” Fouad said.


She further added that an ambitious target was set for 50 percent of the country's projects to be green by 2024 and 100 percent by 2030.