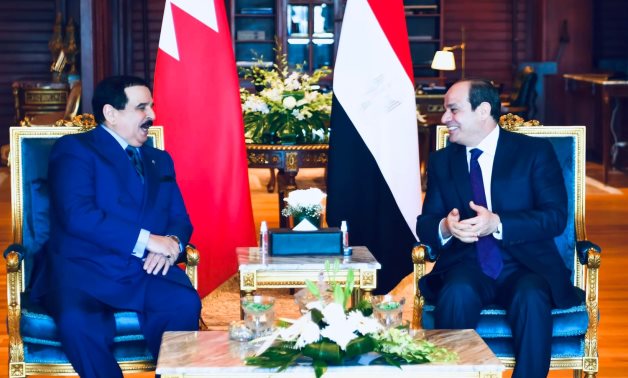 CAIRO – 7 July 2022: Bahraini King Hamad bin Isa Al-Khalifa received a written message from Egyptian President Abdel Fattah El-Sisi to invite him for participation in the world leader summit of the 27th session of the Conference of the Parties (COP 27) hosted by Egypt in Sharm El-Sheikh on November 6-18.

The message was handed over to the Bahraini King by Egyptian Ambassador to the kingdom Yasser Mohamed Ahmed Shaaban at Al-Safriya Palace on Wednesday, El Belad Press reported.

On June 28, 2022, the Bahraini King received President Sisi at the Bahrain International Airport.

Egypt and Bahrain share close views of regional and international issues in a way that better serves Arab interests and preserves regional security.

During Sisi’s visit, the two countries underlined the importance of stepping up efforts to reach a just and comprehensive settlement to the Palestinian-Israeli conflict and create real prospects to guarantee resumption of serious and effective negotiations that will bring about peace in accordance with the principle of the two-state solution, international legitimacy resolutions and the Arab Peace Initiative to ensure the establishment of an independent Palestinian state within the June 1967 borders.

This came in a joint statement issued on the occasion of President Abdel Fattah El-Sisi's visit to Bahrain.