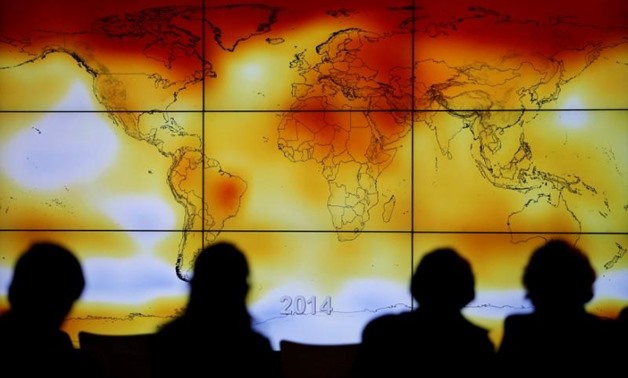 Participants are seen in silhouette as they look at a screen showing a world map with climate anomalies during World Climate Change Conference 2015 (COP21) at Le Bourget, near Paris, France, December 8. REUTERS

During the meeting, Fouad stressed that COP27, that will be hosted by Egypt in the Red Sea resort city of Sharm El Sheikh in November, will build on the outcome of COP26, noting that she will participate next week in the first non-official ministerial talks on adaptation which is one of the most important topics for Egypt.

She highlighted the importance of working on adaptation alongside committing to the goal of reducing earth's temperature by 1.5 Celsius.

She noted that COP27 will witness the launch of several initiatives on adaptation and food security, noting that Egypt's stories of success will be reviewed at the COP27.

She tackled the efforts exerted in Sharm El Sheikh to be a green city, including turning to electric means of transportation, declaring a number of hotels as green, switching to the use of renewable energy and the granting of green star for diving centers.

For her part, the UN official said there will be cooperation with Egypt in the field of disaster risk reduction, adaption and resilience.

Mizutori added that the UNISDR office is also ready to collaborate in initiatives on water and early warning systems.