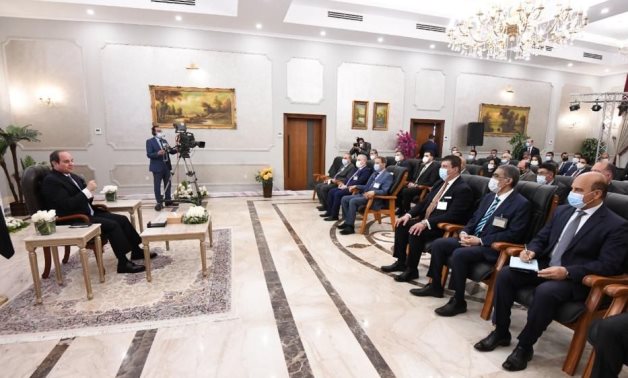 CAIRO – 21 April 2022:  Egypt’s President Abdel Fattah el Sisi asserted that economic reform has enabled the state to be more capable of facing economic crises, reiterating the need for controlling the population growth so as citizens could feel the economic improvement.

During meeting with journalists and media figures, Thursday, Sisi reiterated that challenges facing Egypt are bigger than the abilities of any government, adding that work is proceeding to outline a plan involving all parties to help counter such challenges.

Sisi said the volume of economic growth in Egypt is not equivalent to the population growth rate, therefore, the state seeks to decrease the gap between the state's growth and the population increase.

The economic crisis has started in the wake of 2011 when Egypt lost large parts of its foreign reserves, he said, adding that without controlling the population growth there will never be any economic boom.

Sisi thanked the efforts of Egyptians and their steadfastness which contributed to upping economic growth rates, noting that he never blacks out any information from the Egyptian people as he never makes any compliments and has always been straightforward and frank.

He said this situation was similar to a patient that should receive proper treatment after he has become seriously ill.

Sisi explained that the challenges facing us are bigger than any president or government, but the Egyptian people are greater than such challenges

He asserted that the state proceeds according to plans and in a race against time, which is a vital element, noting that all people were astonished over his affirmation over the past six years on the necessity of accelerating the economic reform to narrow the gap between the state's economic abilities and the increase in population.

Sisi also noted that the population growth has currently become greater than the work energy of the state.

Egypt has paid a tough economic bill since the start of an economic reform plan in November 2016, he said, but the result was that Cairo has become able to stand against current crises and all tough circumstances such as the coronavirus pandemic.

The natural food supply and products coming out to the whole world whether agricultural, industrial or technological have been badly affected by disturbances in any of the great countries, Sisi noted, explaining that the International Monetary Fund (IMF) asserted that 143 countries worldwide would be harmed by the global crises and that Egypt's economic growth rates were very positive despite the coronavirus crisis

The president said Egypt has recorded positive economic growth rates ranging between 3.2 to 3.8 percent during the coronavirus crisis, while growth has increased to 9 percent with the start of the current year contrasting with what happened in world countries.

All basic commodities have been provided to the citizens despite the world crisis, he explained.

The state has been keen since 2017 on securing supply of basic commodities for a period of six months and has allocated necessary financial funds to meet such objective, Sisi noted.

Sisi underlined the affirmation of Minister of Agriculture and Land Reclamation on achieving self-sufficiency of vegetables and fruits.

Addressing the Egyptians, Sisi said the state has handled all issues from a comprehensive perspective in contrast to previous eras. The chains of supply and storage have been insufficient, but now wheat silos have a stock of 3 million tons.

The president reiterated the importance of maintaining production rates as well as supply and storage chains so as to cope up with growth rates of the population, noting that the state's infrastructure was "very humble" and citizens could not afford any lack of electricity or butane cylinders.

He made it clear that the state prioritized the urgent issues which have a big influence on the public opinion.

On the Ukrainian crisis, Sisi said the repercussions of this crisis has a very big influence on the economic conditions worldwide, noting that the state is currently seeking to counter such impact and that his main concern at present is to guarantee that every factory in Egypt works with full capacity and efficiency.

In case of closing down any factory, there will be unemployment hikes and this will not be permitted by the state.

He said contacts will be made with the trade chambers, businessmen and investors to ensure the availability of supplies needed for the continuation of production, especially the basic commodities

Sisi noted that the Egyptian economy was negatively affected by the coronavirus crisis and the conflict in Ukraine, noting that the positive side in such two crises is that Egypt's economy was able to persist and absorb such shocks along with achieving a proper growth rate.

He said Egypt was among three or four countries in the world that were able to reach positive growth rates reaching up to 3.3 percent.

As regards Egypt's stance regarding the Ukrainian crisis, he said Cairo is trying to play a positive role to reach a ceasefire and encourage the diplomatic solution to settle the Russian-Ukrainian conflict.

Sisi reiterated that the sharp influence of the Ukrainian crisis is not only from the economic side but rather relevant to the security and political sides.

On terrorism in Sinai, Sisi said terrorism had established a base six years before 2011 and such information is certified and published on social media sites, calling for watching movies about Sinai in 2010 and in which terrorist groups showed their powers.

He asserted that Sinai was greatly targeted in outlined plans.

Sisi noted that the state has maintained the principle of citizenship and non-discrimination among Egyptians on the basis of religion and worked on overcoming any attempts for differentiating between Muslims and Christians.

He added that all state practices over the past phase aimed at guaranteeing equality in rights and duties without any discrimination.

President Sisi stressed the necessity of preserving our nation which is a safety umbrella for all Egyptians, noting that the freedom of opinion and freedom of belief are protected.

He said: "I can disagree with your ideas or beliefs, but the umbrella that should protect us all should be to protect our country."

Sisi also voiced confidence over the strength of the Egyptian national fabric and the measures taken by the state to maintain the national unity.

All Egyptians, whether Muslims or Christians or disbelievers, have a place and rights in Egypt which is a law state which holds anyone accountable for his wrong actions, Sisi said.

Regarding the "Decent Life" initiative, Sisi said the state will continue to implement such initiative which aims at improving the living conditions of 60 million people nationwide, asserting that all necessary funding will be provided to continue on with this plan.

He went on to say that lack of any sanitary drainage services in the Egyptian countryside is not acceptable at all, highlighting the state's efforts to rehabilitate canals at a total cost of EGP 90 billion

Sisi asserted that "Decent Life" initiative has a national, moral and religious perspective, noting that he was keen on implementing the three phases of the initiative over a period of three years. He also highlighted the important factor of time which was vital in rendering it a success.

The state has encountered a big challenge upon implementing such initiative which is lack of planning over a period of 40 to 50 years in the Egyptian countryside.

He said the initiative aimed at supplying electricity, clean water and sanitary drainage services in a sustainable way without a halt.

The president pressed the need for holding a political dialogue that complies with the idea of launching or building a new state or a new republic, noting that he intends to give more details on the issue during the Iftar banquet of the Egyptian family.