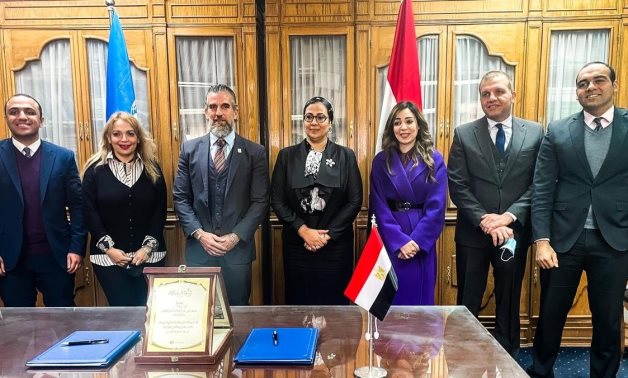 CAIRO – 17 March 2022: Egypt’s Minister of Justice Omar Marwan signed on Wednesday a memorandum of understanding (MoU) with the UNICEF on the judicial protection of children’s rights in Egypt.

The MoU seeks to ensure the establishment of ideal child courts across Egypt, a country that has few juvenile courts and where children serve sentences in special institutions.

As per the MoU, a national plan of action would be implemented to enhance children’s rights within the judicial system in Egypt in coordination with governmental and non-governmental institutions.

“Today, a memorandum of understanding was signed between the Ministry of Justice and UNICEF Egypt to protect the legal rights of children, whether they are victims, witnesses or accused,” UNICEF Egypt said in a statement.

The MoU seeks to “apply the restorative justice approach and use alternative measures to penalties that deprive the freedom of children who violate the law,” the UNICEF added.

The MoU signed on Wednesday represents a framework to develop joint cooperation and coordination between the Egyptian justice ministry and UNICEF regarding implementing an action plan to support and promote the rights of children in conflict with the law, the UNICEF said in a statement.

The MoU also seeks to protect rights of child victims and child witnesses in Egypt.

This is in addition to enhancing joint cooperation in “developing a training curriculum and implementing capacity building programs for justice professional to develop skills and knowledge and address operational issues, in coordination with concerned authorities,” the
UNICEF added.

As per the MoU, support will be provided in cooperation between the ministry and the UNICEF to establish model child courts and child-friendly rooms in criminal courts in several governorates nationwide.

Being among the six countries who first called for a meeting for the World Summit for Children in 1990, Egypt was also one of the first countries to ratify the Convention on the Rights of the Child (CRC), a landmark convention to protect children’s rights.

In 1996, Egypt ratified its Child Law to become the the first legislative instrument to ensure the protection of children's rights in the country.

The Child Law, which was later amended, ensures the protection of children’s rights regarding healthcare and social and educational services.

The Child Law also addresses rehabilitating and educating the handicapped child as well as the child's criminal responsibility.

In 2008, the Child Law was amended to adopt a rights-based approach regarding children who are deprived of their right to have education, health and social care.

“Such modifications aim at changing the way in which society views such children,” Egypt’s National Council for Childhood and Motherhood says.

In December, President Abdel Fattah El-Sisi has issued a presidential decree to amend some provisions of the Child Law No. 12 of 1996.