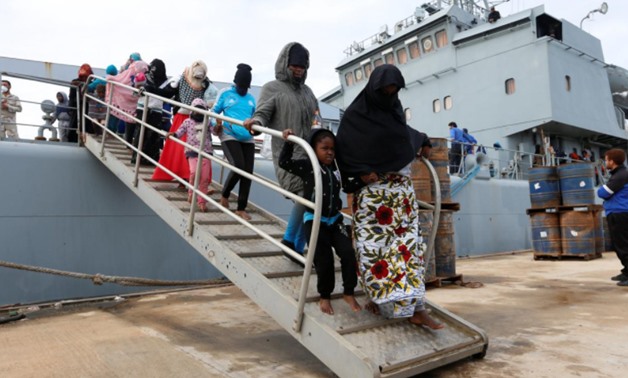 Migrants arrive at a naval base after they were rescued by Libyan coast guards in Tripoli, Libya, December 16, 2017 - REUTERS/Ismail Zitouny

CAIRO - 25 July 2020: The Libyan navy has rescued 182 migrants off its west coast before heading for Europe on board rubber boats, Al Wasat news website reported quoting a statement by the Libyan coast guard.

The Libyan coast guard regularly carry out rescue operations as part of humanitarian and legal efforts to safeguard and secure the lives of illegal migrants who sneak through the Libyan coasts to cross the sea to Europe.

A boat belonging to the Libyan coast guard moved the migrants to a Tripoli base ahead of handing them to the department of combating illegal immigration.

Despite unabated violence in Libya since the fall of Moamer Kadhafi's regime in 2011, the country remains an important transit point for migrants fleeing instability in other parts of Africa and the Middle East and seeking to reach Europe.

Last year, a boat carrying dozens of illegal migrants capsized off Libyan coasts resulting in 100 victims in November. The UN refugee agency stated in February that the total number of migrants intercepted by the Libyan coast guard in January rose 121 percent from the same period last year.