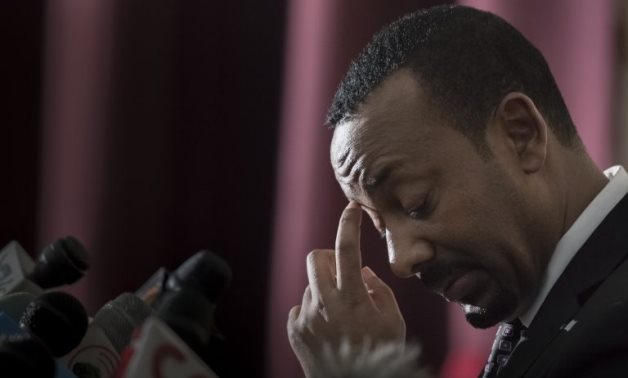 CAIRO – 8 July 2021: Observers believe that Addis Ababa’s unilateral decision to start the second filling phase of its mega reservoir is meant to draw international attention away from the killings that took place over the past months in Tigray.

Ethiopian Prime Minister Abiy Ahmed “is trying to save face” after his heavy defeat against Tigrayan rebels, observers said.

Hani Raslan, Counselor at Al-Ahram Center for Political and Strategic Studies, stated in TV statements that Abiy Ahmed’s defeat “is complicated and its actual consequences and impact will not be felt now.”

Photos of the Ethiopian troops withdrawing from Tigray after months of fighting, and celebrations taking into the streets as a result are believed to have shaken Abiy Ahmed’s popularity.

“We can now say that Abiy Ahmed’s efforts to convert the political system in Ethiopia from the ethnic federalism to the political centralization system that was prevailed during the emperors’ reign has been hit by a fatal blow,” Raslan added.

He further explained that Ethiopia’s premiere is in a state of confusion, and “that is clear in Ethiopia’s official statements that is unrelated to the status quo.”

Discussing the recent announcement to start the second filling of the Grand Ethiopian Renaissance Dam (GERD), Raslan said that “the date of the announcement was made earlier than its original date on July 22 on purpose ahead of the UNSC session.”

He continued, “Abiy Ahmed is sending a message to inside Ethiopia that he is still strong and can challenge, and to preoccupy his people with other major incident after deadly fights over the past months.”

Raslan explained that Abiy Ahmed’s defacto policy when dealing with the GERD issue “reflects a very bad message about Ethiopia that it insists on remaining an outlawed state that violates other countries rights.”

He finally warned that Ethiopia’s policies will backfire on Ethiopian people, unfortunately, who are harmed from massacres that took place and left behind thousands at risk of starvation.”

A couple of days ago, the Ethiopian government pulled out its troops from Tigray after months of fighting that killed thousands of people, and left millions suffering food scarcity.

The New York Times reported that during the parade in Mekele, the regional capital, there were more than 7,000 captured Ethiopian soldiers, who marched to prison for approximately 75 kilometers south of the capital, for a period of 4 days.

The U.S. newspaper described the scene of the parade of prisoners, bowing their heads and lines of crowds cheering as a “rebuke to Ethiopia’s prime minister Abiy Ahmed,” who denied reports of his defeat as a lie, and rather said that his unilateral cease-fire was for “humanitarian reasons.”