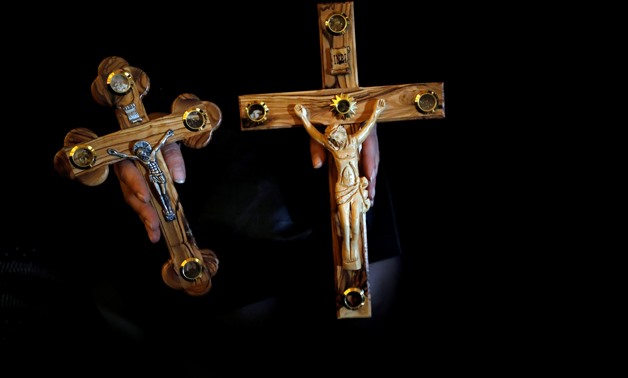 CAIRO – 5 May 2021: Attempts by Ethiopian monks to obliterate the identity of the Coptic Church’s Sultan Monastery in Jerusalem are not acceptable, Egyptian Member of Parliament Amr Ezzat said on Tuesday.

Ezzat, who represents the MPs who belong to the Coordination Committee of Parties' Youth Leaders and Politicians (CPYP-Egypt), said in a speech at the Egyptian parliament that CPYP fully supports the Egyptian church in defending its legal and historic rights to the monastery.

Ezzat demanded that the Israel assume their responsibilities as the de facto authority on the ground in securing and protecting Egyptians monks and property in Jerusalem.

Clashes broke out between Ethiopian pilgrims and Egyptian Coptic monks at the Monastery of the Sultan in Jerusalem on April 29.

The Monastery of the Sultan or [Deir Al-Sultan] located on the roof of Helena Chapel in Jerusalem is affiliated to the Egyptian Orthodox Church; however, Ethiopian pilgrims insisted on placing the Ethiopian flag on the monastery.

The behavior of Ethiopian pilgrims angered the Monastery priests who held a sit-in in front of the Monastery and contacted police forces and officials to interfere correcting the situation.

The behavior was labeled “provocative’ by the Monastery’s monks as it coincides with the Holy Week celebrations which usually witnesses the arrival of thousands of pilgrims to Jerusalem.

Deir Al-Sultan is one of the most important historical sites for the Copts.

The monastery witnessed a long-term dispute over its ownership between the Egyptian Orthodox Church and its Ethiopian counterpart.

In a statement by the Egyptian Orthodox Church in 2018, it affirmed that the monastery has been affiliated with it historically since before the 12th century. However, after hosting several Ethiopian monks by the Monastery in the 17th century due to problems paying taxes to the state, they [Ethiopian monks] started making disputes over the Monastery ownership.

This dispute continued until the Supreme Court in Jerusalem ruled that the keys of the monastery be returned to Egyptian Copts on March 16, 1971

Sami Wakela, manager of Me Sat channel office in Jerusalem, which is affiliated with the Coptic Orthodox Church, said in statements that the Ethiopians placed their flag on the Monastery.

“This action angered the monks who reached out for the Israeli police forces to help them, but they didn’t” Wakela added. He explained that no violent clashes took place between the two sides.

He said that these acts are more related to “political interests” than any historical or religious issues. “The Israeli forces are refusing to take any actions against the Ethiopians despite their aggression. There is no government to help us or to give us back our right,” Wakela said.

He further explained that the Egyptian Coptic Orthodox Church has a ruling from the International Court of Justice that proves the Egyptian right of the Monastery’s ownership, but the Israeli government refuses to implement it.

Bishop Atallah Hanna of the Coptic Orthodox Patriarchate in Jerusalem condemned all of the “Ethiopian provocations” taking place at Deir Al-Sultan. He added that these kinds of breaches have political motives.

He called on the Patriarch of the Ethiopian Orthodox Church to stop these actions especially during the holy week celebrations.

He accounted the Ethiopian Orthodox Church responsible for the breaches taking place in the Monastery.